Activity in St. Catharines’ real estate market continued at a steady clip in 2013, despite some softening over the summer months on the heels of a healthy spring market. Buyers regained enthusiasm into the fall and through the final quarter of the year, with sales expected to end the year at 2,700 units—three per cent above the level reported in 2012.

Average price is forecast to climb in tandem, advancing two per cent to $258,000. Confidence remains positive, given favourable affordability and continued low interest rates. The boomers remain a driving force in the local real estate market, with many looking to the area as an attractive place to settle into retirement. The appeal is clear, with single-detached homes in St. Catharines priced as much as $100,000 less than communities closer to Toronto. While inventory remains relatively balanced overall, short- ages do exist, particularly in the popular $250,000 to $400,000 range, fuelled by move-up purchasers.

While boomer empty nesters and retirees drive the trend toward newer product—ideally bungalows or garden homes—some are looking to the condominium sector for a more carefree lifestyle. That segment is slowly gaining traction in St. Catharines, with new, two-bedroom condominiums priced from $250,000. Young buyers are willing to compromise to secure the dream of homeownership, with many looking to pockets of the downtown core—undergoing a wave of renewal—where older homes with character and charm can be had from $190,000 to $230,000. Revitalization continues unabated throughout the city, with the trend toward renovation showing no signs of slowing.

Serious demand exists from investors, yet supply of sought-after product simply does not meet their needs. Some creative investors are snapping up older homes to remodel and convert into four-bedroom rentals, given decades of healthy income potential. A growing number of parents are also taking advantage of affordable housing values and financing rates to help their children achieve home ownership, rather than pay expensive residence fees or rental rates. 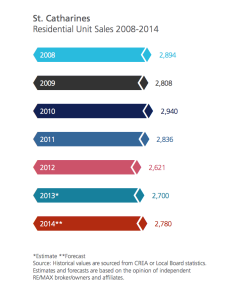 The potential for the housing market over the longer term is closely tied to migration patterns, particularly among Generation X and the millennial generation. St. Catharines’ efforts at economic diversification is expected to bode well for in-migration and household formation, as more students and youth opt to lay down permanent roots in the city. A greater upswing is needed, however, for better sustainability, but the city is heading in the right direction. It is already capturing an increasing number of boomers and retirees. From major partnerships to considerable capital and public investment—the city is establishing new projects, infrastructure and amenities to bolster its appeal.

Job growth remains a focal point, but employment is expected to rise in 2014, while unemployment continues to trend downward, falling just below the eight per cent mark. Manufacturing is forecast to improve in tandem with growing strength in the U.S. economy and amid weakness in the Canadian dollar. In the interim, the city is benefit- ting from a rising entrepreneurial spirit in industry, with a proliferation of diverse small to mid-sized companies emerging. Tourism is also improving and the region’s wineries are gaining increasing acclaim. With St. Catharines steering its transition and striving to bolster economic underpinnings, confidence is expected to remain strong. 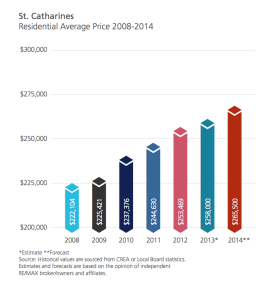 Both sales and average price are forecast to climb a further three per cent in 2014. An estimated 2,780 homes are expected to change hands, while average price will set a new record, reaching $265,500 by year-end 2014. Inventory will remain the wild card, but levels should improve in the new year, bringing most areas firmly back into balance.

The upper end of the market posted significant sales gains in 2013, which should ease some- what as the supply of homes priced over $500,000 continues to rise. However, activity will remain at healthy levels, with newer luxury homes in Niagara Falls, Port Dalhousie, Cole Farm, Grimsby and the lakefront most sought after. The north end will remain a hot pocket among move-up buyers, coveted for its established communities, good schools, amenities and proximity to transportation routes.

Competition among first-time buyers should soften, allowing for more choice and time to make decisions. Condominiums will continue to gain favour among singles and older purchasers, especially given St. Catharines’ land-locked status and the focus on higher density.